Eventzee Exposure is a chance for us to showcase some of the events we have worked with, and a chance for potential clients to see the outcome of hosting an Eventzee event. Each month we’ll highlight a different event that made use of Munzee or Eventzee, and hopefully you can get an idea of what we can do for you!

Nestled into the North of Dallas is the suburban city of McKinney, Texas- home of Eventzee and Munzee. This city (which has nearly 150,000 residents) may continue to grow in population and infrastructure, but McKinney takes it’s small-town roots very seriously. The city clings to their rich history- specifically it’s downtown- and because of this McKinney was named Money Magazine’s #1 Best Place to Live. So when the city of McKinney was in need of a tool to bring visitors to historic locations Downtown, Munzee knew exactly what to offer. 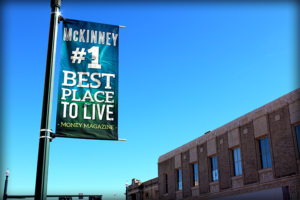 Additionally McKinney sought a way to share the history of the location with visitors. Using what would become Eventzee tech, 15 buildings were chosen for a special tour, each with a QR code displayed prominently in the window. The app marked each of the buildings’ location on a map, and when scanned the QR code launched an external website sharing the information of the historical building. The integration of the app into the historical tour has increased visitor experience and engagement with the downtown area. This combination of new age technology and historical landmarks fit perfectly with McKinney’s evolving community.

“From a tourism standpoint, Munzee’s use of McKinney’s existing QR code tour of historical buildings has greatly increased exposure of our downtown square’s unique story to our visitors,” said Dee-dee Guerra, Executive Director of the McKinney Convention & Visitors Bureau. “This is a perfect example of Munzee’s understanding of how to enhance and encourage tourism which is one of the reasons our Board awarded them the 2014 Tourism Partner of the Year Award.”

McKinney is excited to continue to work with Munzee and Eventzee- so much so that they named Munzee as their 2014 Tourism Partner of the year. The simple idea to push people to historically meaningful buildings has led to a fruitful partnership between Munzee and McKinney, and we’re proud that our app has been able to help in so many different ways. Trails and partnerships like this is what has led to the creation of Eventzee. With Eventzee, hunts like McKinney’s can be extended as long as needed for public use. Our ongoing program package is perfect to help increase exposure and drives traffic to lesser known areas, much like the historic buildings in downtown McKinney.

“We’re excited about the Eventzee app they just released. It provides an additional method for getting people outside to explore the world around them,” Guerra said. “In fact, the McKinney CVB is working with them to create an Eventzee scavenger hunt for something we’re doing in May. Eventzee is going to help us add a whole new dimension to our annual event and we’re excited about helping people learn more about our beautiful city with this new, fun tool.”

What can Eventzee do for you? Contact eventzee@munzee.com to start planning your hunt today!