As we announced in Eventzee’s Year In Review post, 2018 is a year of Transitions. With that in mind we’re excited to promote our sister app ZeeTours’ new Contest feature- which you can join NOW in the ZeeTours app.

As a quick refresher, ZeeTours is a self-guided City Tour app that combines fitness, learning and fun into an unforgettable experience. Follow the tour path to a variety of points of interest, solve clues to complete challenges, and learn more about the city around you.

Currently ZeeTours has a handful of tours in American cities, but we wanted to give international players a chance to join in the fun- that’s where the Contests come in.

Similar to Eventzee’s former Premium Hunt platform, these pay-to-play Contests allow players from around the world to compete for prizes by completing themed Trivia and Photo Challenges. A new Contest is held each week starting on Wednesdays and running through Mondays. Each Contest includes a wide variety of Trivia and Photo challenges based on a weekly theme.

To join a Contest players need to:

As players complete Challenges they will earn points and a spot on the leaderboard. The top three winners from each Contest will then be awarded prizes.The prizes will vary from week to week, but could be Freeze Tag Inc gift cards, Amazon gift cards, etc.

Although ZeeTours has some similar features, there are a few notable differences that will make this a bit different of an experience from what Eventzee players are used to. We think you’ll all have a great time, but here’s a quick rundown of some of the differences.

Sequential Challenges
Unlike Eventzee’s list of clues being released all at once, in ZeeTours you’ll have to complete each Challenge one by one to advance to the next task.

Trivia Challenges
ZeeTours Contests put a big focus on Trivia Challenges. Similar to Eventzee you’ll lose points if you answer incorrectly, but there is also a speed bonus for answering correctly quickly.

Each set will include:

Photo Review
Unlike Eventzee there is no ongoing review process with ZeeTours Contests. At the end of the Contest the top three players will have their photos reviewed to make sure there are no clear cheaters. Because of this players will have the length of the Contest to complete challenges and upload photos, but will not be able to resubmit their photos if they are declined. In the event a cheater is identified, their Challenge will receive zero points and a new player will take their spot on the leaderboard. 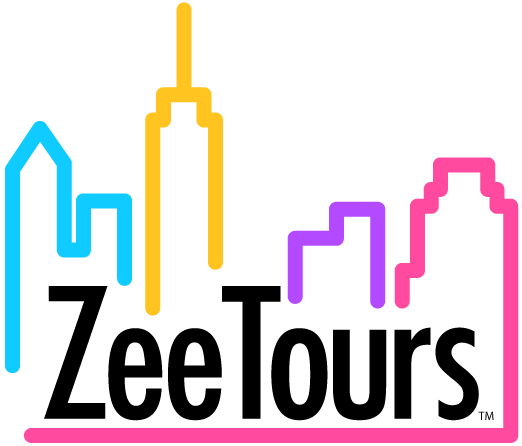 In other ZeeTours news, we have also released tours in an additional five American cities with another four tours going live on Friday, February 2nd. All tours are available for purchase at www.zeetoursapp.com, in the mobile app via in-app purchase and through the Groupon app and website.

Thank you all for your continued support of both Eventzee and ZeeTours! Be sure to join this weekend’s ZeeTours Contest as well as our usual Weekend Warriors free photo scavenger hunt, which goes live Thursday at 3 PM CST.

In 2017 Eventzee stayed the course, and maintained our current client base while adding efficiency behind the scenes.* Although there may not have been many feature heavy updates, our focus for the year was optimizing how we do business to make our experience more efficient for both the customer and our staff. We’re thankful to all of our clients and particularly our partners who have continued to do business with us multiple times over the years.

With a new year comes new challenges and opportunities. In 2018 our focus and theme of the year will be “Transitions.” We plan on maintaining our core gameplay values, but also expanding our focuses into new markets and revenue sources. The first step in this process was the development and release of our new app ZeeTours- a Zany Walking Tour Adventure. ZeeTours take you on an adventure in the real world, using similar gameplay mechanics as Eventzee. 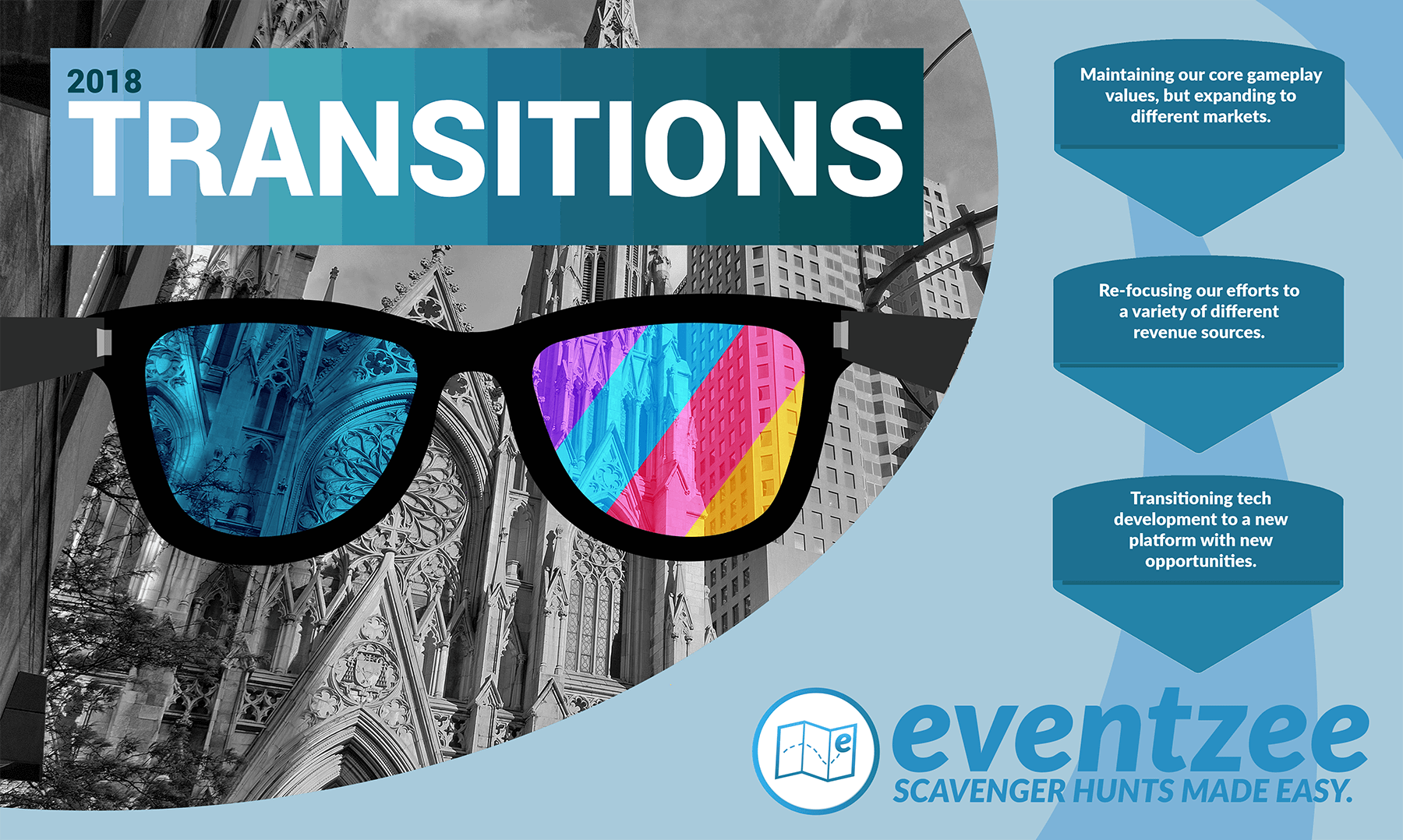 ZeeTours is a location-based smartphone game that combines fitness, learning and fun into an unforgettable experience. Follow the tour path to a variety of points of interest, solve clues to complete challenges, and learn more about the city around you. To purchase a tour voucher code just visit ZeeToursApp.com or download the app to your Apple or Android device. ZeeTours are currently available in nine cities with plans to expand to more at the beginning of 2018.

While Eventzee has always been focused on event based scavenger hunts, ZeeTours gives us the opportunity to reach new communities via an updated platform. The development of ZeeTours has also given us the opportunity to develop the Eventzee program in the near future. What exactly this development will look like is still to be determined, but we have lots of plans we hope to bring to fruition in 2018.

So as we begin transitioning to this new platform we want to thank all of our players and clients for their patience and support for nearly 3 years. We’ve got new and exciting things on the horizon and we’re ready for the transition!

*Check out the infographic below to see some fun stats about Eventzee’s 2017! 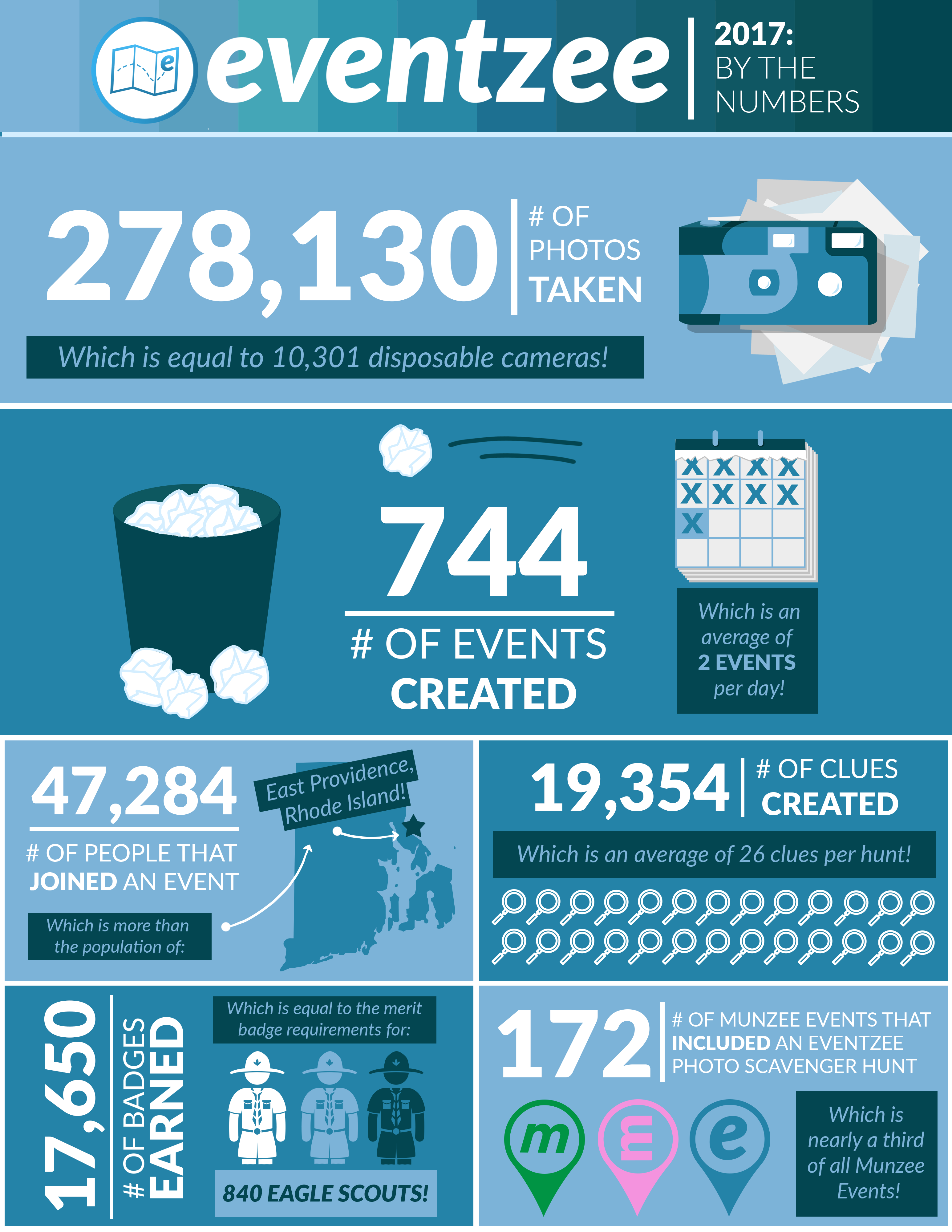 Scavenger hunts have always been a fun way to interact with others and support camaraderie, but we’ve moved past the limitations of pen and paper. Eventzee takes scavenger hunts to a whole new level by supporting worldwide events and new ways to interact with players. While Eventzee makes it easy to host your own scavenger hunt, it’s up to YOU to make it memorable. So if you’re considering putting on your own, here’s a few tips to get you started.

While photo hunts are totally fun and encourage social interaction, QR Code scavenger hunts can be used in a number of educational ways. When hosting your own hunt you may choose to use QR clues, which can be converted into a quiz or a GPS clue as well. GPS clues are especially handy if your hunt is throughout a city or campus with distinct locations.

Topographical Tourists
Eventzee GPS Hunts are great for showcasing unique and unknown parts of your town or city. Whether it’s historically important locations or simply a map of local restaurants, adding GPS coordinates to a clue is a fun way to get players exploring the places around them. Each clue’s location also shows up on the Eventzee map so it’s perfect for tours of all sorts.

We’ve Got Spirit How About You?
It’s not easy to get around campus your freshman year, but an Eventzee GPS hunt can be a fun way to help educate new students about their surroundings. Map out financial buildings, sports complexes and more important locations for your campus. You can even attach quiz questions to each location to test new students knowledge about the history of each building.

Late Night Latitude
Planning a night out? Pub crawls are a great social activity that double as a way of exploring a city’s unique nightlife locations. Get a group together and schedule out your whole night with Eventzee. Check in at each bar with GPS clues, then include fun photo clues to make the night unforgettable.

Creating Your GPS Hunt
Setting up GPS clues is easy. When you’re first creating your hunt you simply make sure the hunt is “Geolocation Based.” From there you’ll just add clues like normal with a clue name and description.

To set the GPS coordinates for an individual clue you’ll click on the gear icon to access the clue’s settings. There you can either search for the location or add the exact coordinates yourself. Then whenever you’re ready, just place the QR codes at each location.

Remember, your event is what you make it, but Eventzee is here to make it as easy on you as possible. To get a more in depth look at setting up Eventzee hunts or how to play Eventzee check out the following guides.

Now that you have some ideas about how to start your Eventzee scavenger hunt, go out and make it happen! If you’re interested in hosting an Eventzee event, sponsoring an official Eventzee photo hunt or just curious about what we can do, contact us at eventzee@munzee.com.